A partner in a large Cambridge, Massachusetts-based venture capital firm is confident that investors’ appetite for biotech startups will begin to pick up in the fall.

Bruce Booth has spent two decades with Atlas Ventures, which specializes in biotech newbies. He thinks the lull in equity flowing into the industry is already turning around. He has watched investors’ enthusiasm for biotech wax and wane several times and after the recent period of “waning,” he sees an upward trend.

Of course, it is starting from a relatively small base. After an explosive couple of years when biotech startups flooded the public market, initial public offerings have hit the proverbial wall. Only 16 companies have priced new stock offerings in 2022 compared with 82 at the same time last year, according to BioPharma Dive. Half of them raised less than $40 million, well off the valuations new biotechs garnered during the height of their popularity. Private financings for companies approaching an IPO are also running into difficulty.

Atlas is putting its money where its mouth is. It is the founding investor in Third Harmonic Bio Inc. (THRD, Financial), which debuted this week, selling nearly 11 million shares for $17 apiece and raising more than $213 million, making it the largest IPO in months. The shares soared to about $21.50 soon after trading began, but have since receded to just under its offering price. 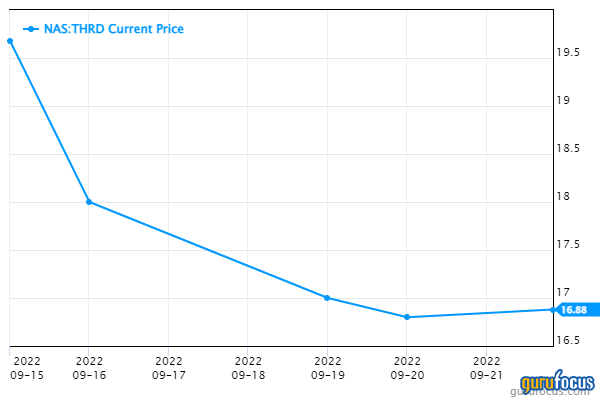 The market’s reception to Third Harmonic bucks a trend. BioPharma Dive reported biotechs that have gone public in 2022 have largely done so at significantly lower values, extending a steady decline in the size of stock offerings over the last two years. Median IPO values have fallen in six of the eight full quarters since the second quarter of 2020, when the median biotech IPO reached a recent peak of $183 million.

Atlas, which has 45 companies in its portfolio, bought additional shares of Third Harmonic on Sept. 19. Along with the convertible preferred stock, the fund has become a more than 10% owner of the company.

Third Harmonic is a clinical-stage biopharmaceutical company focused on developing a drug to treat severe allergies and inflammation. The company’s primary target is urticaria, better known as hives, a skin reaction that causes itchy welts. Chronic hives are welts that last for more than six weeks and return often over months or years. They can be highly uncomfortable and interfere with sleep and daily activities.

An effective treatment would be welcomed by the approximately 25% of the population that suffers from urticaria at some point in their lifetime; at any time, about over 1.5 million people in the U.S. are affected.

Third Harmony’s drug is licensed by Novartis (NVS, Financial). It uses the same technique as a treatment from Celldex Therapeutics Inc. (CLDX, Financial), but has the advantage of being taken orally as opposed to Celldex’s injectable.

It is still questionable whether the Third Harmonic treatment works. An early trial in Europe showed the drug lowered levels of a protein associated with an effect on urticarias. It began a phase 1b trial in Europe this month and expects to report data next year. A phase 2 study in the U.S. is expected in 2024. The company is also studying the drug in asthma and plans to evaluate it in a range of other allergic and inflammatory diseases, according to its IPO prospectus.

What to expect on a sleeper train